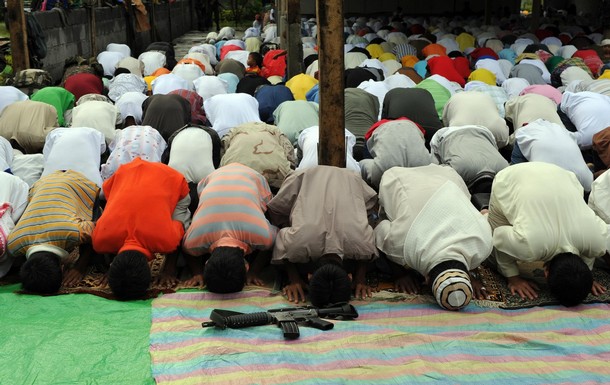 Members of the southern Philippine rebel group, the Moro Islamic Liberation Front (MILF), pray to celebrate the start of the three-day Eid al-Fitr feast, which marks the end of the holy Islamic month of Ramadan, at Camp Darapanan in Sultan Kudarat, in the Philippines’ Maguindanao province, on Mindanao island on September 20, 2009. About five percent of Filipinos are Muslim, making them the largest minority in the mainly Roman Catholic nation. Muslims all over the world are set to begin the three-day holiday Eid marking the end of the fasting month of Ramadan. AFP PHOTO/TED ALJIBE (Photo credit should read TED ALJIBE/AFP/Getty Images)